Currency - All prices are in AUD

Currency - All prices are in AUD

The Trains in the Gulley Kansas City Railroading Softcover Book^ 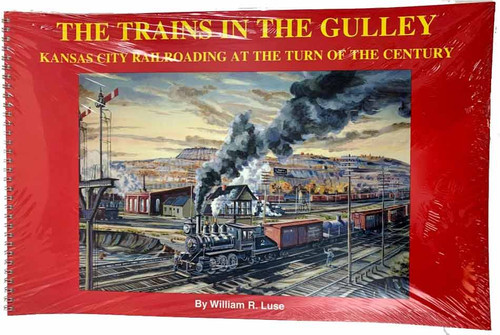 The Trains in the Gulley Kansas City Railroading Softcover Book^

Trains in the Gulley by William Luse Spiral Bound Oversize Kansas City Sketches
The Trains in the Gulley by William Luse Spiral Bound Kansas City railroading at the turn of the century  Measures approx 11 X 17 inches   93 illustrations
All through 1882 and 1883 Dodge City was great news in Kansas City. For instance, the famous Luke Short swung through town, having been chased from Dodge during its "saloon wars"; there were men with shotguns checking all the trains arriving there.
(This I feel was mostly for show, caused by Dodge City reading about itself in the press, as it had become quite famous in its own time. It was surely different from the midnight murders by drunkards using guns that would come to entertain so many who had not to witness the stupid, ghastly event.)
It was said in the Kansas City paper that judging from the present troubles in Dodge City, perhaps Luke Short should change his name to "Look Sharp!" Having been devastated by winds and flooding in early 1883, the Kansas City print asked if perhaps Dodge City would care to borrow our cyclone!
The one thing not in the Kansas City news of the time was Kansas City, ourselves being rather staid and sedate. For instance, much ado was made concerning "the four opium dens of Kansas City"; one of which was the bright red "Quong Lung Laundry" below the Barnum Hotel at fourth and Main. At the same time the pages were filled with advertisements for "Burnett's Cocoaine. The best of all hair dressings. It allays irritation, removes all tendency to dandruff, and invigorates the action of the capillaries to the highest degree ... Its effect upon the glossiness and richness of the hair is such as cannot be surpassed." (Also putting a curl to it, I'll bet! Personally, I would take up with the "yellow peril," as, at the very least, they seemed to know what they were doing.) Notably each issue without exception had much news concerning railroads, and that was on the front page, as news it was. Brakemen, passengers, and so on were always in the news for being smashed by that devilish "Fort Scott train," which, for some or another reason, seemed to be the most fearsome of all the trains.
Now in early 1882 there was also mention of something referred to as "the switch."

This product hasn't received any reviews yet. Be the first to review this product!